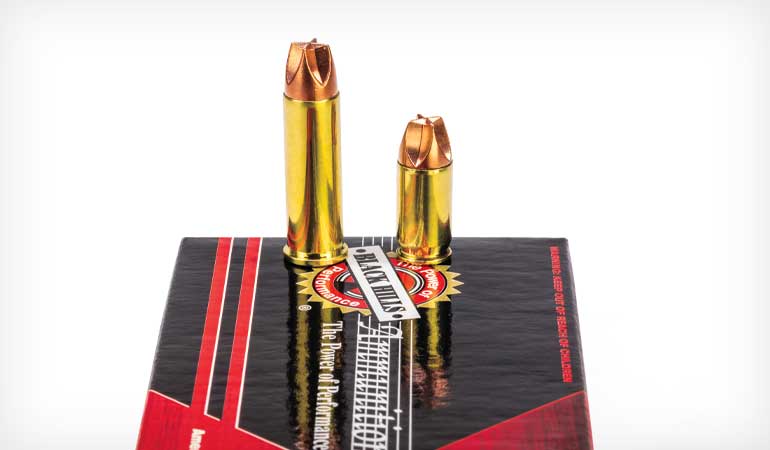 As the saying goes, “There’s more than one way to skin a cat.” The same can be said for pistol ammunition development over the past 10 years. The goal of ammunition manufacturers since the late 1980s has been to develop reliable and consistent terminal performance that’s minimally affected by reasonable urban barriers projectiles might encounter prior to striking a target.

The advent of bonding jackets to lead cores in the 1990s was a step in the right direction, but it did not solve the problem with consistently penetrating barriers. With the introduction of nonbonded, soft, polymer-­tip bullets by Hornady about 10 years ago, and with the arrival of their Critical Duty line in 2011, the market got its first barrier-­blind bullets. Then along came Jeff and Kristi Hoffman, owners of Black Hills Ammunition, who in 2015 introduced the Honey Badger line of ammunition and changed the game of terminal performance forever.

To be clear, Jeff Hoffman of Black Hills Ammunition and Dave Fricke of Lehigh Defense are joint patent holders of the Honey Badger bullet. (No, it’s not a knockoff of the fluted ARX projectile design.) The two pooled their knowledge and unique resources to design an unconventional solid copper, fluted projectile designed to be a barrier-­blind self-­defense round.

Hoffman decided early on that he wasn’t going to pursue a pistol bullet designed as another variation of a bonded bullet nor was he interested in reinventing the polymer-­tipped projectile. Rather, he wanted a bullet that was entirely new that outperformed most jacketed hollow point (JHP) bullets when shot through barriers. Hence, work began on an all-­new, solid-­copper projectile.

One of the drawbacks of using solid-­copper pistol projectiles, especially of traditional expanding design, is the difficulty of achieving consistent expansion and terminal performance at pistol velocities. The solution to this problem had largely been addressed by the late Charlie Kelsey of Devel Corporation in 1992 with a patent for a fluted, sintered copper bullet. However, Kelsey’s work didn’t go anywhere until about 2012 when Hoffman and Fricke began a research and development program on monolithic copper bullets. Kelsey’s work was their starting point.

Hoffman and Fricke conducted extensive testing with machined, fluted and solid-­copper projectiles to investigate design parameters and their effects on performance. The flute size, shape, depth and width were all evaluated. They studied projectile weights and velocities as well as the external shape versus the number of flutes — three versus four — in different calibers and firearms to ensure reliable feeding and functioning. From this research, they were able to establish a matrix of design parameters for optimized bullets in different calibers and velocity ranges. All this work focused on being able to select appropriate design solutions to achieve optimum terminal performance in any caliber at a specific velocity. Along the way, they also developed a patented nose design for use in firearms fed by a tubular magazine.

Video That May Interest You

Asked where the name “Honey Badger” came from, Hoffman said the bullet’s characteristic performance led them to pair it with the animal.

“The bullet is like the small, but ferocious, honey badger,” Hoffman explained. “It doesn’t care about barriers that cause other bullets to fail.”

Honey Badger bullets are the result of more than two years of development and were first unveiled in 2017 in .380 ACP, 9mm and .38 Special. It’s difficult to argue that the Honey Badger has quickly become respected for its barrier-­blind performance for each cartridge offered.

With that said, the Honey Badger bullet is not a one-­size-­fits-­all design. Each bullet was specifically designed for its cartridge and velocity range. Flute width, shape and depth, as well as bullet weight and velocity were each tuned for optimum penetration and temporary wound cavity. The external shape of each flute was carefully selected for absolute feed and function reliability.

Honey Badger projectiles feature a monolithic-­copper, fluted and nonexpanding design. Each has a cannelure that the case mouth is taper crimped into. This particular feature provides more consistent bullet pull and prevents the bullet from pushing back into the case when impacting the feed ramp.

Most Honey Badger bullets have a second groove in the bearing surface to decrease engraving and chamber pressure, and most feature a hole in the base. This is another well-­thought-­out feature that functions in several ways. First, it allows a longer bearing surface on the lightweight bullets. This improves bullet alignment with the case, aiding accuracy. It also improves the gas seal of the bullet in the bore, especially with some of the low-­pressure pistol rounds such as .38 Special, .380 ACP and .45 ACP. This contributes to performance uniformity and reliability. Additionally, it moves the bullet’s center of gravity towards the nose, which increases bullet stability. This is particularly important for allowing the Honey Badger bullet to penetrate barriers without yawing.

When a jacketed, lead-­core bullet has an intermediate barrier placed between it and the expansion media, the expanding properties and terminal performance of the bullet can be dramatically changed. The hollowpoint can be filled with the barrier material, which prevents the bullet from reliably expanding. The nose of the bullet can be crushed, and the hollowpoint closed up, also preventing the expansion of the projectile. When impacting intermediate barriers such as glass, the bullet can be destroyed because it doesn’t have the strength and hardness to withstand impact with such a hard, abrasive surface.

So how does the monolithic-­copper Honey Badger achieve such consistent and reliable terminal performance? Honey Badger bullets use the flutes on the nose of the bullet to produce their terminal effects. The flutes channel and redirect the expansion media radially rather than depending on bullet expansion to displace the material. In other words, the bullet does not depend on a soft and weak material to move and deform to produce expansion media displacement. These bullets are very tough and seemingly preprogrammed to produce their effects. The width of the flutes and the associated flat on the point of the bullet can be adjusted to tune the terminal performance and penetration depending on bullet caliber, weight and velocity. This is evident when looking at the nose of the different caliber bullets.

Due to the precise machined flutes, the results are always the same. Honey Badger bullets do not have a hollowpoint to clog or deform when impacting intermediate barriers. That’s a key feature. The only apparent differences when shooting Honey Badger bullets through barriers are slight changes in temporary cavity and penetration. This is caused by small losses of velocity and energy while penetrating the barrier. Put plainly, Honey Badger bullets are tough, resilient and do not need moving parts to reliably get the job done.

The proof is in the pudding. Ordnance gelatin is, and has been, the standard for bullet testing for some time because it provides a very accurate prediction of performance. Over 40 years of testing and comparison to actual field shooting has shown that gelatin is an extremely accurate simulant of live muscle tissue and bone. The FBI has shown over and over again that the results obtained from gelatin are predictive of what happens in the real world. Besides gelatin, Black Hills also uses intermediate barriers to test their bullets for toughness and performance reliability.

What’s particularly impressive with the Honey Badger loads are their performance through glass. Glass is an extremely hard and abrasive barrier that has always been the test that causes lesser bullets to fail. As seen when fired through glass and into gelatin, Honey Badger bullets easily penetrate a typical glass barrier with little negative effect on the projectiles terminal performance. I have tested tens of thousands of bullets in gelatin through all types of barriers and I have concluded that Honey Badger ranks with the very best of them.

Honey Badger is primarily advertised as defensive ammunition, but it has great appeal as a tactical load for law enforcement use due to their need for barrier performance.

Boringly, all loads functioned flawlessly. There were no malfunctions encountered during these tests. Recoil was noticeable in the small handguns but was more comfortable than other +P loads of the same chambering fired through the same guns. In the P238, I found that the pistol was very controllable and had less felt recoil than the heavier bullet loads available.

My testing was done at 25 yards with all handguns fired atop a sandbag rest positioned on a bench. I make no claims to be a marksman with a handgun, and most of these pistols sported a short sight radius. Relative to my shooting ability and the handguns they were tested from, the accuracy results using Honey Badger were as good or better than most ammunition types I’ve shot using these same handguns.

Whether you’re a member of law enforcement or a citizen in search of the best personal-­defense round, or perhaps you’re a hunter getting ready to head into the field, the Honey Badger will give you reliable, consistent and effective terminal performance. You won’t be disappointed.