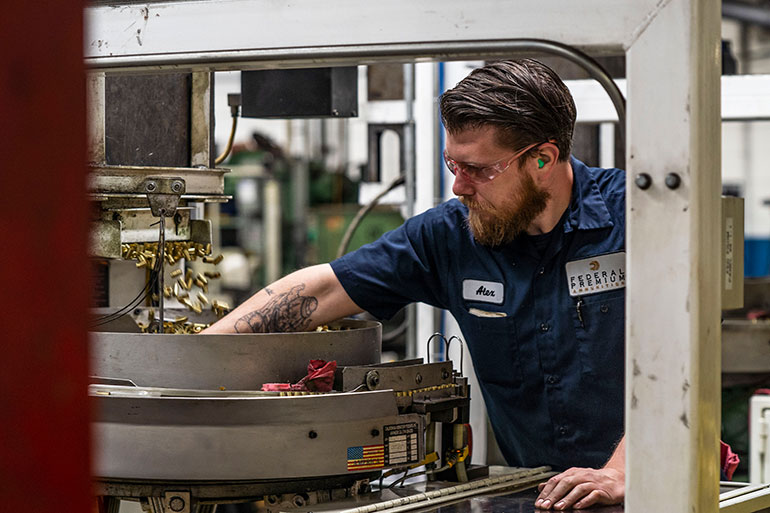 AUGUST 2020: Where can a law-abiding citizen find handgun ammo? And what’s available?

The year 2020 deserves a lengthy chapter in future history books. From the Coronavirus pandemic, to the subsequent closures and stay-at-home orders, to the social-justice protests, there’s been plenty for Americans to worry about. These factors, combined with rising unemployment and an uncertain economy, have caused a spike in gun and ammunition sales. The citizens of our nation are catching on to what gun owners have long recognized: the world is a volatile and sometimes dangerous place. The person you must rely on most for your personal security is you.

Panic buying started in March and has lasted for months since. Ammunition supplies are depleted. Defensive ammo for handguns is extremely hard to locate in certain parts of the U.S., but you don’t have to be searching for .380 ACP or 9mm to feel the impact of prolonged panic buying. Ammunition manufacturers are scrambling to keep pace with demand that far outstrips supply. You can bet that some lower-volume ammunition is going to sell out and won’t be restocked anytime soon. If an ammo company has already sold more 9mm ammo than they had in stock, do you think they’ll stop and retool their machines to make a batch of .357 SIG ammo, for example? Not likely. Once the current supply of .357 SIG is depleted, it’s going to be some time before ammo makers have breathing room to start making loads that are less in-demand. (The .357 SIG remains excellent for defensive use, but popularity decides production.)

Let’s take a look at the most in-demand handgun ammunition and see what’s available, and what it’ll cost.

Local gun shops are hit or miss on 9mm ammo — mostly miss. To acquire 9mm, we’ve been told that a customer must be at the store when a shipment of 9mm ammo arrives. In some places, you’ll only lay your hands on some if it all hasn’t already been sold ahead of time.

Brownells.com is out of stock at the time of this writing. Cheaperthandirt.com only offers 115-grain loads of 9mm in 50 round boxes from TulAmmo, Armscor and Wolf for between $39.89 and $44.89, and a 200-round box of Winchester PDX1 Defender 147-grain JHP for $300. Basspro.com was out of stock. Everest.com only had two loads, Allegiance RangeStrike 124-grain ($19) and Grind Hard 90-grain Xtreme Defense load ($30) in stock. MidwayUSA had limited options of lightweight defensive ammo by Underwood Xtreme Defender ($21) and Liberty Civil Defense, which uses a fragmenting 50-grain hollowpoint ($30).

When I first clicked on Brownells’ website, of 122 offerings, just two loads were in stock from Black Hills, and I suspect only because I clicked on the site as the shipment landed at the warehouse in Grinell, Iowa. That means 1.6 percent of their normal 9mm inventory is even in stock. MidwayUSA offers 224 9mm options, of which only four were in stock with mixed availability. That translates to 1.8 percent availability. When I spoke with my local gun-store owner, Jeff Steele, he told me that 9mm had been the single hardest product to keep in stock. Prices at the major online retailers are commiserate with what they are during periods of normal demand, though, so you won’t necessarily pay more, you just won’t find any 9mm. If you do, you better buy it.

It’s interesting to compare the .40 S&W with the 9mm. Over the past few years the .40 S&W has taken a bit of a beating from the shooting press. With the FBI’s adoption of the 9mm, it’s largely been dropped by law enforcement agencies in favor of the 9mm. However, it’s still a good self-defense cartridge, and police trade-in .40s are a great value. But how is .40 faring during the panic buy?

MidwayUSA has 28 SKUs of .40 S&W ammo available out of 106 offerings, so roughly 26 percent of their normal supply. However, Brownell’s has no .40 S&W in stock at the moment while they normally stock 81 different loads. CheaperThanDirt! has 22 different loads including premium defensive ammo from brand-name manufacturers, and Bass Pro Shops has 14 .40 S&W options including a 300-round ammo can. Everest.com didn’t have any .40 S&W ammo at the time of this writing. Most target ammo for the .40 S&W is running around $0.40 cents a round, while defensive ammo runs anywhere from $1.00 to $1.35 a round at the larger stores. I didn’t find any .40-caliber ammunition at my local chain farm store, but I did find a box at my local gun shop. It was priced slightly higher than what is available from online retailers, but there are no added shipping fees and you can walk out of the store with it.

The .380 is popular for personal defense, so you’d expect it to be in short supply—and you’d be right. MidwayUSA lists just one of their 69 .380 load as “in stock,” and it’s even categorized as “mixed availability.” That equates to 1.4 percent. Brownells.com offers 43 .380 loads with one currently available, or 2.3 percent. Bass Pro Shops has 12 offerings including 300-round cases, and CheaperThanDirt! offers just two loads. Everest doesn’t list any .380 ACP ammo currently. There was none at the farm store near my home, and Steele said “.380 comes through the shop sporadically.” He classified it as “second only to 9mm in terms of scarcity.” Prices do seem a bit higher than usual, with .380 ACP running from about $0.50 to $1.00 (plus) per round, which is likely a byproduct of limited availability and higher demand for the cheapest ammo.

The .45 ACP has been a popular personal defense round for more than a century. Depending on where you look, it’s in stock and out in other places. Brownells.com has five of their 89 loads in this caliber available (almost 6 percent), including quality defensive offerings such as Speer’s Gold Dot and Black Hills’ HoneyBadger. MidwayUSA normally stocks 115 different types of .45 ACP ammo, but they’re down to just four different loads. CheaperThanDirt! has 10 different loads, Everest.com has four, and Bass Pro has 17. I found .45 ACP ammo at the local gun shop and the farm supply store, so options are looking up for fans of the forty-five. Better yet, prices have remained relatively the same as they were before the pandemic struck.

I suspect the reserves of .45 ammo are a result of so many first-time buyers walking out of gun shops with whatever self-defense handgun they can find. Most first time buyers are purchasing 9mms, .380s, .38 Specials, and similar in terms of power and felt recoil. The .45 is a great defensive gun, but it’s not where most shooters begin these days. That could improve the popularity of the .45 in coming months among experienced shooters if these shortages continue.

The .38 Special makes a fine self-defense round, and new shooters love the simplicity of revolvers. So, how’s easy is it to find .38s? MidwayUSA had just one of their 106 .38 Special loads in stock — and it was shotshell ammunition. That’s less than one percent in-stock availability. Brownells.com normally carries 60 different .38 loads, and they’re down to just two, which is only 3 percent of what’s typically available. CheaperThanDirt! lists eight .38 Special loads, but one of those is blanks (as in no projectile); we’ll call it seven. Everest.com didn’t have any, and Bass Pro Shops had nine .38 and .38 +P offerings. The local gun store had one box. My local farm store? Forget about it.

It’s hard to judge prices with such a small selection of assorted loads. How do you compare two premium defense loads with a single shotshell load and get anything resembling accurate data? Of course, 9mm and .380 ACP ammo are hard to find, but .38 Special might be challenging them as the ultimate buy-it-when-you-see-it pandemic ammo purchase.